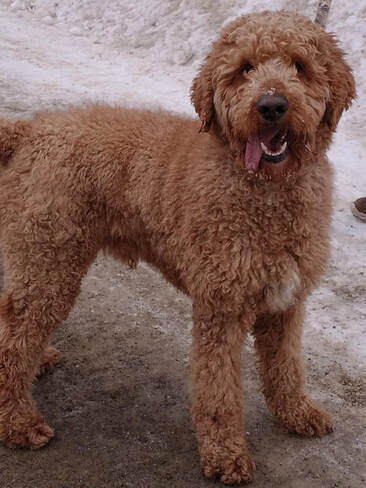 Named after the late "Chester Bennington" of Linkin Park, Chester is getting more handsome by the day! He is an F1B (Mom is a an F1 doodle, Dad is a Poodle). He is our stud male. He is a beautiful Carmel or Champaign color with white patches. He and our girls have produced some absolutely gorgeous babies!! He is a very loving boy and a sweetheart too! He loves to play soccer and fetch. He too has been Embark health tested and is CKC registered. Chester will be moving on in 2024 after our girls Tilly and Lila retire to pair with our newest females Magnolia (Maggie) and Cassidy for some new F2B babies but these babies being offspring of two F1B parents will be 75% Poodle and 25% Retriever unlike our previous pairing of the F1's to the F1B. So our puppies will all be much more hypoallergenic than ever before!! We will create curlier as well!

​   Respectfully named after three amazing late, great musicians, Weiland Scott, Layne Staley and Chris Cornell of Stone Temple Pilots, Alice In Chains, and Soundgarden. Weiland is our newest edition. He is a Standard Poodle and will become a future stud! I'd say he's a stud already!! He comes from two parti CKC registered Standard Poodles in his colors of tan and white which is his Mom, and black and white which are his Dads colors. Weiland will also be DNA/Health screened through Embark and he will be CKC registered as well. Our females Lila and Tilly will be retiring towards the end of 2023.
Weiland, Cinnamon, Maggie and Cassidy will be taking over!! With some help from Chester with Maggie and Cassidy.
We will then be producing F1BB (backcross of an F1B doodle to a Poodle to produce higher hypoallergenic qualities 88% poodle, 12% Retriever), F2BB (which is F2B x Poodle to also create the highest hypoallergenic qualities 87.5% Poodle and 12.5% Retriever. With Weiland we will also be producing Parti-colors!! I for one can't wait!!!